On June 23, twenty-five years ago, Super Mario 64 was released in Japan: it was 1996. Let’s relive together the development and cultural impact in this special.

Exactly twenty-five years ago, on June 23, 1996, Super Mario 64 was released in Japan; it accompanied the launch of Nintendo 64 not only on Japanese soil, but also in the rest of the world. To be precise, in September 1996 in the United States, and in March 1997 in Europe. It was the first three-dimensional video game dedicated to the plumber, but not only: its innovative scope was much, much wider. It is probably not easy to understand, not having lived at the time, what it really meant for gamers around the world and for the industry itself this innovative work of Shigeru Miyamoto. We’ll try to remember it in this special issue for the 25th anniversary of Super Mario 64.

The development of Super Mario 64 lasted three years, and ended only a month before the final release, around May 20, 1996. Not many people worked on it, at least by today’s standards, and not even in relation to The Legend of Zelda: Ocarina of Time, which would arrive two years later. According to Miyamoto’s reconstruction, the average staff would have been between fifteen and twenty people. A middle ground between the small teams that shaped the two-dimensional titles, and the much larger ones that would arrive only a few years later. 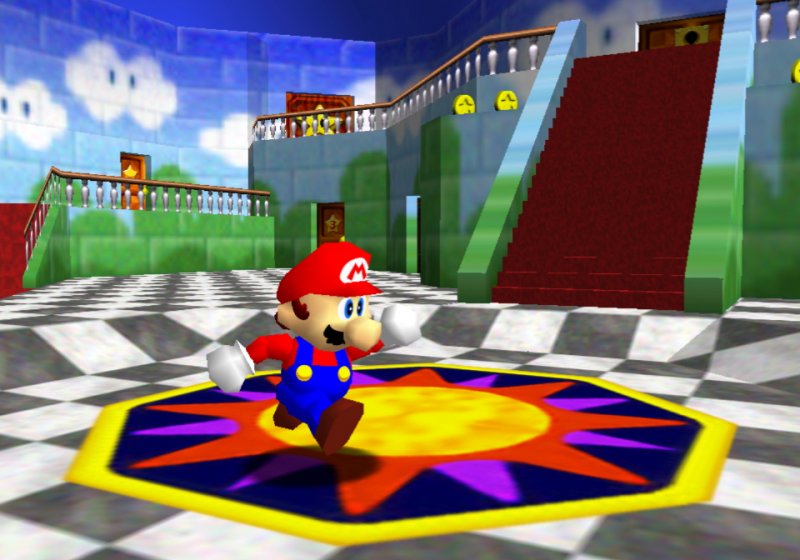 Super Mario 64: every picture in the article is taken from the edition present in Super Mario 3D All-Stars.

It seems that the idea of a three-dimensional Super Mario obsessed the master since the time of working on Star Fox, with which the Super FX chip was introduced, which allowed the Super Nintendo to manage advanced two-dimensional graphic effects, but above all a rudimentary, though futuristic, polygonal look. The first concept of the title seems to have provided a linear level design, a sort of transposition of the classic mechanics, with isometric view, in a three-dimensional context (a kind of Super Mario 3D World, in practice).

But for Miyamoto that wasn’t enough. Super Nintendo wasn’t powerful enough, and its pad wasn’t adequate to the needs; moreover, the canonical structure wasn’t pyrotechnic enough to demonstrate the potential of three-dimensional gaming. And this is the first aspect to take into consideration: Super Mario has always been a platformer, but two episodes in particular were made with a more ecumenical intent, namely to move the standards of action games much higher than in the past. A vocation, also by necessity (given the absence of references), more universal than usual.

We are talking about Super Mario Bros., which has redefined in many ways the two-dimensional action game; and, of course, Super Mario 64. A game that has marked, perhaps more than any other, a before and an after.

Super Mario 64 was the last game officially directed by Shigeru Miyamoto (because, in fact, he also followed Ocarina of Time although credits go to Toru Osawa, Yoichi Yamada, Eiji Aonuma, Yoshiaki Koizumi and Toshio Iwawaki). The development team of this project has something special: the creative core marked the meeting of the past of Super Mario and its future. There are, in leading roles, the two historical figures associated with the plumber: Miyamoto and Takashi Tezuka. There is the legendary composer of the saga, Koji Kondo. But in addition to them, with an equally important position, there is Yoshiaki Koizumi: Miyamoto’s pupil, the man who – after this episode – would have been in charge of the plumber’s new adventures.

It seems that master and pupil even worked at night to perfect the three-dimensional movements of the moustachioed Italian-American, the true heart of the work, modifying detail after detail: moving the center of gravity by a few millimeters, adjusting the animations. There are legendary tales about Miyamoto miming the ideal swimming movement, with his torso resting on a chair parallel to the floor, and Koizumi next to him recreating it inside the game (yes, let’s imagine the frog-style part). 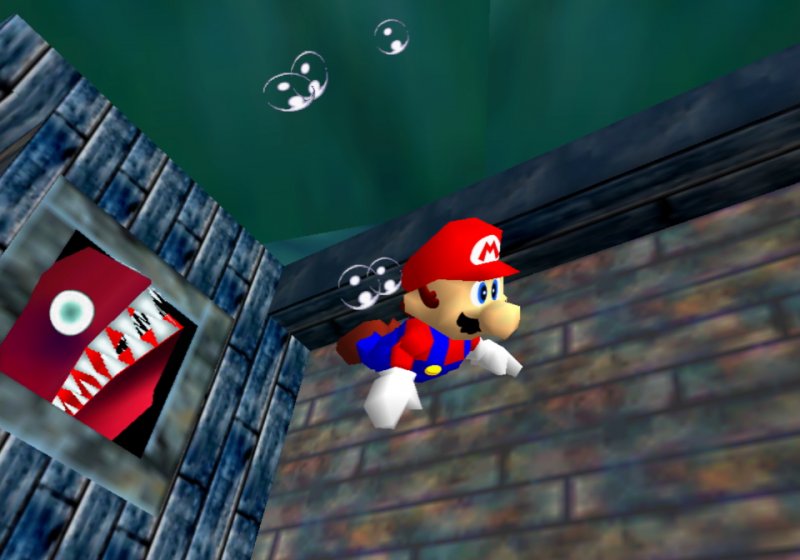 Super Mario 64: the swimming movements, made by Yoshiaki Koizumi.

And the movements, perhaps more than anything else, made Super Mario 64 immortal. Previously there had been other polygonal games, and even other three-dimensional games; but none, not even close, had ever been as cohesive, perfect and harmonious as Super Mario 64. The plumber’s movements right from the start were designed for the analog control stick, at a time when, among the competition, analogs weren’t even present on the pad.

It is still difficult, twenty-five years later, to find works in which the movement of the character is so modulated in relation to the inclination of the stick: in Super Mario 64 the protagonist moves on tiptoe, walks slowly, walks fast, runs lightly, runs hard (and we have left out some gradations, no doubt). Compared to the beautiful and slightly later Tomb Raider, the difference is amazing: in Super Mario 64 seems to actually control a person, in Tomb Raider a heroine who moves rigidly within a grid.

It seems to actually control a person, we said; and it is true, however that person had – has – extraordinary acrobatic skills. Super Mario 64 is full of jumps: long jumps, triple jumps, vertical jumps, back jumps, crouch jumps. And each jump is accompanied by a different exclamation from Charles Martinet, the plumber’s voice actor: a fortunate association that still endures today. 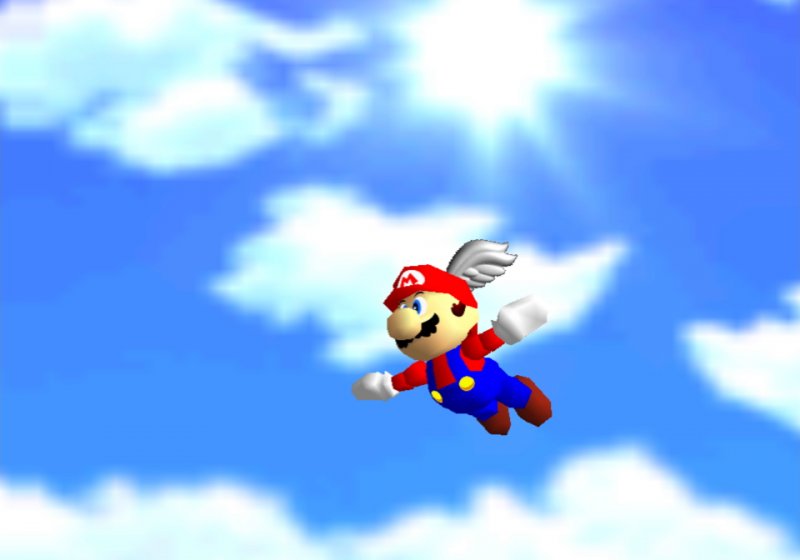 Super Mario 64: one of the most famous power-ups, the winged hat.

The controls could have been extraordinary even in a linear game; even in a Crash Bandicoot-style title, to name the most famous, which was a direct continuation of the old two-dimensional platformers. As we said before, Miyamoto and Nintendo were not interested in creating a three-dimensional platformer, but an action game like they had never seen before. 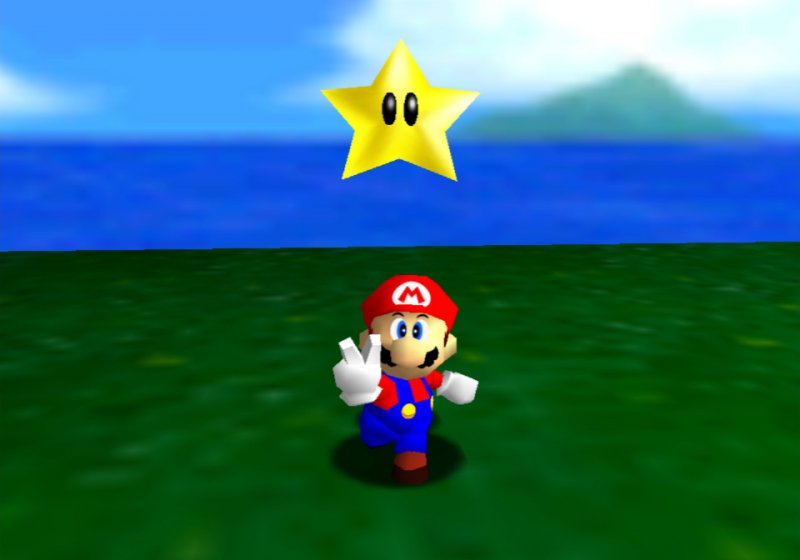 For this reason, game design and level design were subjugated to the exaltation of the exceptional three-dimensional movements, and to the exploration of their potential. Instead of linear levels – with a beginning and an end – an initial area was created to be explored at will, the Castle of Princess Peach with its garden, from which to access, jumping through the magical paintings, all the other paths (fifteen). Each of these levels had six stars (plus one, generated by the collection of one hundred yellow coins), to be collected in an order recommended but not required. Basically, as in many open worlds today, but in a less guided way, you walked around the stage until you found an area of interest that hid a star. Only a few stages showed the linear legacy of the classic antecedents, and would have been precursors of what would become Super Mario Galaxy: we are referring to the Bowser stages, more linear and less exploratory than the others.

The commercial success of Super Mario 64 was very big: it is the best-selling game for Nintendo 64, with almost twelve million copies. An admirable result, but inferior to many previous titles of the plumber. The real triumph of the work lies in its cultural impact: in the following years, Super Mario 64 would be the polar star to follow. A new Bible of game design to read, study, take and imitate. A guide to transport in three dimensions every two-dimensional brand. 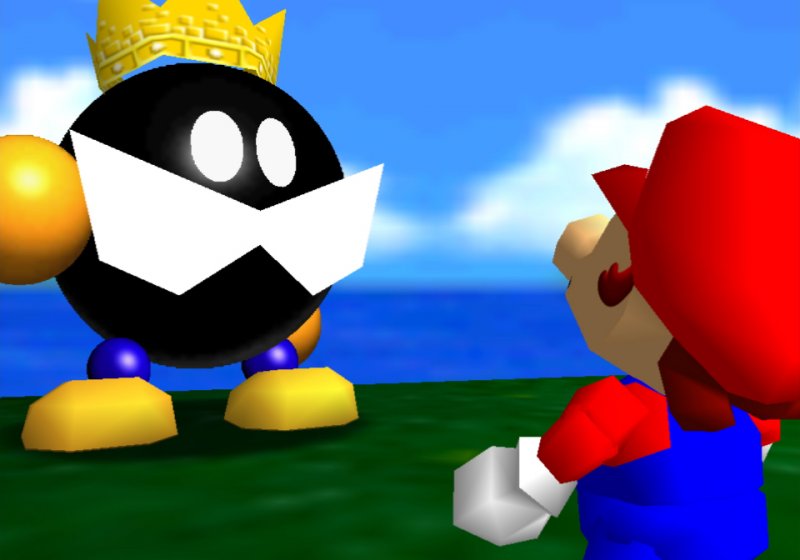 Super Mario 64: King Bob-omba, the first boss of the game.

A guide that also spawned some small monstrosities. Given its beauty, every software house felt compelled to embrace three dimensions, even when it didn’t make too much sense: see Mega Man Legends, see Castlevania 64. Super Mario 64 gave the illusion that three dimensions were the only possible future, that 2D gaming was dead, or dying. And the first victim of this approach was Nintendo itself, which relegated the plumber’s two-dimensional series to a crawl space for fifteen years.