The story of the Nintendo 3DS ends with the excellent spin-off that crosses the most famous people in a long and challenging adventure. Our review of Persona Q2: Ne Cinema

There is something poetic about the fact that Persona Q2 is the last title to come out for the Nintendo 3DS. The Atlus first-person role – playing game represents, in a sense, the history of the Nintendo handheld in several respects, for better or worse: it is the return of a great franchise, even if in the form of a spin-off that, however, uses the lower screen of the console in an exemplary way, a feature inaugurated by Nintendo DS years ago and that only a few titles have been able to squeeze with intelligence. Persona Q2 is also the last exponent of a category, that of Etrian Odse And at the same time, Persona Q2 also represents missed opportunities: that unattainable horizon, because it is the spin-off of a series that is born and grows on a competing platform, and that controversial technology, because the Etrian Odse A kind of digital contradiction, in short, but also an RPG that is a small jewel, as you will read in our review.

It’s important to point out that Persona Q2 is a game in its own right: although it’s a sequel to Persona Q, you don’t need to have played that first spin-off to understand the story, and likewise it doesn’t place in any precise narrative space. Walking on the thin border of the fanservice, Persona Q2 brings together in a single game the casts of three different titles, set in different eras – that is, Persona 3, Persona 4 and Persona 5 – for a total of twenty-seven playable characters, to which is added the protagonist of Persona 3P. the doubt that the script would not have been able to enhance a roster so nourished had come to us, we admit, and instead Atlus surprised us with a delightful and at times disturbing story that not only respects the bizarre atmospheres of the reference titles, but also manages to give enough space to each character through dialogues full of irony, written in English and dubbed in Japanese. 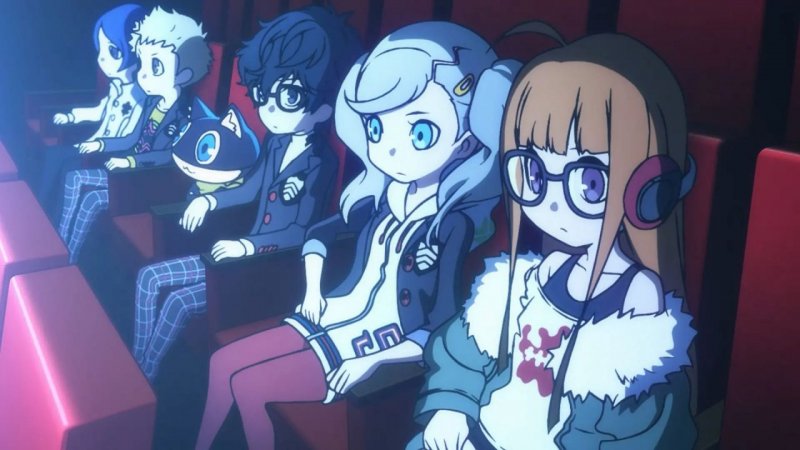 The writers succeeded in the difficult task with a simple trick, and that is by diluting the introduction of the cast more slowly: while in Persona Q we chose which team to start with and within a dungeon we found ourselves controlling all the characters, Persona Q2 prefers a more reasoned approach that goes better with the narrative. The game begins, in fact, with a new adventure of the Phantom Thieves in Mementos: the protagonists of Persona 5 suddenly find themselves catapulted into a strange world where an old rival of theirs has become something of a superhero and the police hunt them down. Taking refuge in a disturbing cinema, our heroes meet Hikari and Nagi, two spectators around whom the whole mystery of NE Cinema Cinema lab lab The dialogues conduct the narrative with a certain frequency, especially between Dungeons, and although it is introduced a little slowly to give space to interactions between the picturesque casts of the Persona, the plot meets all the standards of the original series. 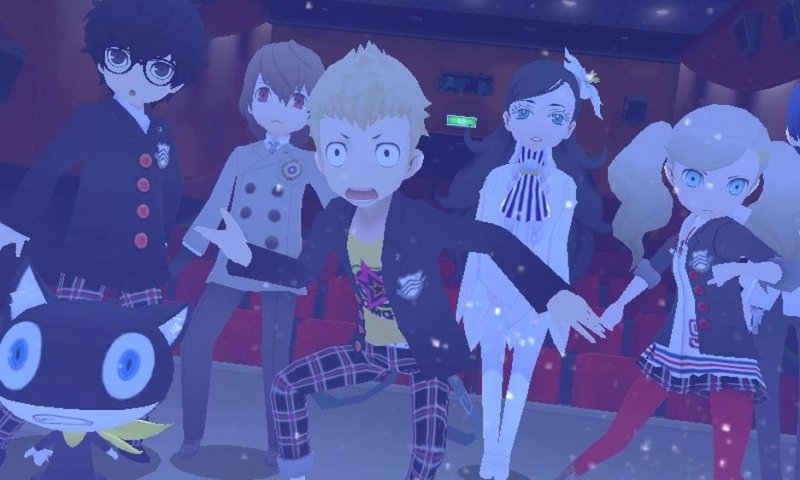 Obviously you have to consider that Persona Q2 is a first-person RPG that is mainly aimed at fans and that is played for the pleasure of seeing all these characters interact in one adventure. In this sense, Persona Q2 does a great job thanks also and above all to the side missions, focused on the relationships between the characters, which put the characteristics of our darlings under pressure in a way that is often hilarious and sometimes even moving. Atlus guys have tried hard to stage their misadventures, whenever possible, through short cartoon kinematics or that make use of the polygonal engine of the game: needless to remind you that we are talking about a Nintendo 3DS and we should not expect sparks, but the “chibi” style employed by Hanako Oribe to represent the characters seemed even more successful than in the prequel, since it goes well with the atmosphere of the game and that also creates an interesting contrast when you breathe a darker air. The merit is also the soundtrack composed by Atsushi Kita Kit 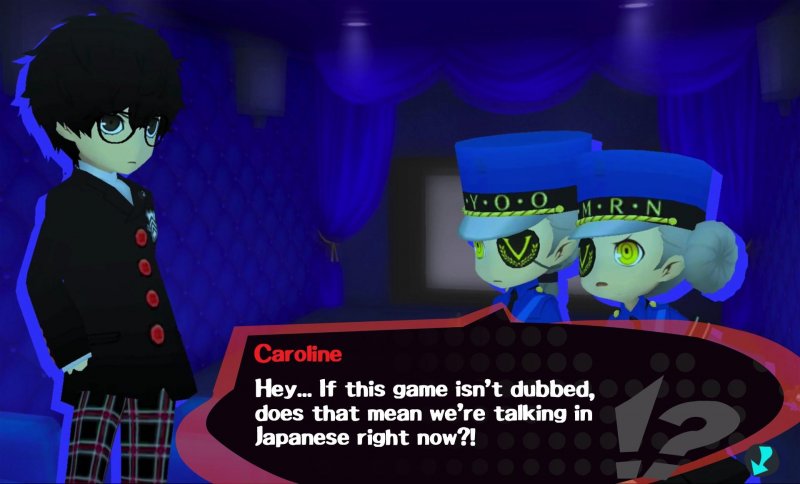 Not received: too bad, Persona Q was gorgeous and it’s not the same as exploring dungeons in first person without the stereoscopic effect.

Fighting and mapping in Q2

The choice to gradually introduce the twenty-eight protagonists also influences the gamepla: although it greatly limits our freedom in the first hours of play, especially if we compare Persona Q2 with an Etrian Odse It will be important, as in the prequel, to configure the formation so that in the front row fight the characters who can only attack in melee and who can protect the rear, where it will be better to place the experts of ranged attacks and healing spells. It is possible to change formation at any time, however, and sometimes swapping the position of two characters could result inlet us catch our breath to someone who was risking his pens on the front line. 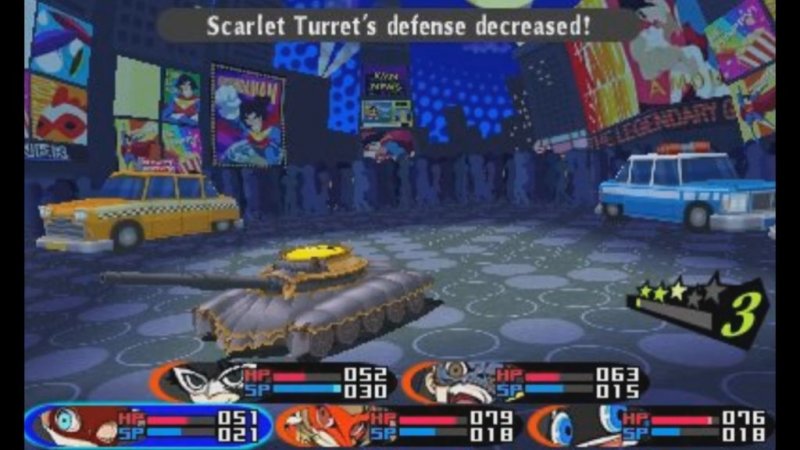 The combat system remained almost the same as the first Persona Q, although Atlus updated it with the introduction of some mechanics such as the Baton Pass already seen in Persona 5 and a series of spectacular combo attacks that are unlocked by completing side missions. Basically it’s still a turn-based combat system focused on the peculiar boost mechanics already seen in the various Persona: each enemy – and part Member, eye-is weak to one or more elements, but if one of our characters takes advantage of the weakness in question, in the next turn he will act faster than normal and will not consume SP to use the abilities of his Persona. Each character, in fact, can use his default Persona and another Persona, captured in dungeons or fused in the usual Velvet Room: it will be essential to try various combinations to complement the skills of our heroes. Occasionally, when all enemies are stunned, you can resort to All-Out attacks that deal a lot of damage, but most of the time you’ll have to resort to abilities that deal abnormal conditions and other more sophisticated strategies. We had the impression that Atlus has raised the bar of difficulty and that some bosses and miniboss – the notorious FOE already seen in Persona Q and in the various Etrian Odse 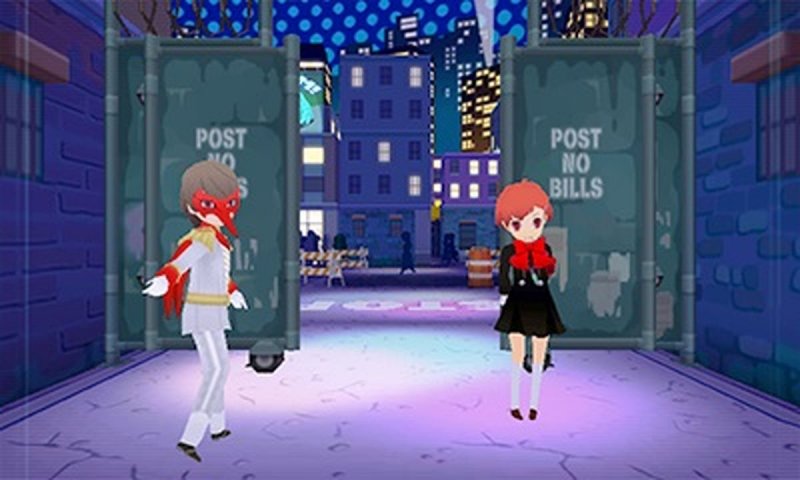 Fortunately, it is still possible to change the level of difficulty among the four available, even if setting the highest level will no longer be possible to decrease it: if the lowest level allows you to face the adventure with great serenity, thanks to a whole series of advantages that greatly simplify life, and to finish it in about thirty hours, already the second level requires some healthy grinding session and a careful choice of the protagonists to take to the battlefield. The complexity of the fights compensates for the greater linearity of the dungeons, compared to the past: don’t get us wrong, they continue to be imaginative and articulate, but in Persona Q2 they are easier to navigate, there are far fewer traps to avoid and in general we felt that the level design was a little less inspired. Despite this, it is always a pleasure to draw maps on the lower screen of the Nintendo 3DS, marking the points of interest and taking an integral part in the adventure also in this aspect. It is one of those unique features that we will miss and that raises several questions about the possible future of Etrian Odse Do not resort to automatic compilation, in case you decide to play Persona Q2: Ne Cinema Cinema lab lab Take the nib and draw the map, it will be an even more rewarding experience.

If you’ve already played Persona Q, know that Persona Q2 significantly improves on the predecessor formula with an even larger cast, more challenging fights and a delightful story that pushes the accelerator above all on character characterization. Nintendo 3DS leaves with a small pearl that will especially appeal to fans in person but that has the ability to conquer even those who have never played the Mother series.